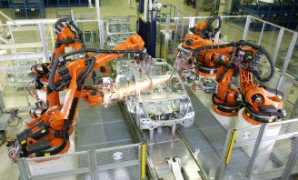 The Yokogawa PX8000 Precision Power Scope is playing a key part in tests being carried out by KUKA Systems as part of a programme designed to minimise the energy consumption of the latest generation of industrial robots.

The Yokogawa PX8000 Precision Power Scope is playing a key part in tests being carried out by KUKA Systems as part of a programme designed to minimise the energy consumption of the latest generation of industrial robots.

As a subsidiary of robotics and plant engineering company KUKA AG, KUKA Systems plans and implements automated production and assembly lines. A key focus of the company is the provision of complete solutions for joining, assembly and handling operations in the automotive and other industries. Robots are ideal for such tasks they offer the flexibility to produce different products via simple program changes.

Energy consumption is becoming a key aspect in robotics, and KUKA is participating with around 50 other companies in a project supported by the German Ministry of Education & Research with the aim of achieving a 50% reduction of energy usage in the production of car bodies. KUKA Systems has also launched its own project on energy efficiency, including the development of a tool to predict the energy consumption of a complete production line at the planning stage.

In order to assess the effectiveness of these measures, detailed information on the energy consumption of the components used in the production line and different robot activities are required. KUKA Systems has built a database for this purpose which contains the respective energy requirements of different robot activities. Some of these data are provided by the manufacturers of the system components while others are determined by appropriate measurements.

“These measurements allow us to capture the actual energy consumption and try out various optimisation options”, says Tobias Zimmermann, development engineer at KUKA Systems: “We mostly consider complete tasks rather than just individual movements, and we also include measurements at individual customers’ premises.” These tests include handling processes and spot welding, both of which involve very different movements. For handling tasks, for example, the robot uses all axes to move the components as quickly as possible from one point to another. When setting welding points, however, it makes many small movements in between generating short high-current bursts for the welding process.

“We also measure the energy consumption of the various tools, which offers further opportunities for savings”, adds Matthias Paukner, project development manager at KUKA Systems: “In spot welding, for example, both the power consumption and wear can be reduced.” In addition, KUKA takes into account the times when the robot is inactive, such as at night-time, by switching everything to “hibernate mode”, a state similar to the standby mode of consumer PCs, which can reduce consumption by 90%.

The robots usually have a motor for each of the six axes, each controlled by a three-phase inverter. In the resting position a robot consumes about 700 W, which after 20 seconds at a standstill is automatically reduced to only 200 W. In the “hibernate” mode, the power consumption of the overall system of control, inverter and robots is about 18 W, and in full operation it rises to peaks about 60 kW. Added to this is the power consumption of the tools.

For measurements on the robots and other equipment KUKA Systems uses Yokogawa’s PX8000 Precision Power Scope with current clamps on all three phases on the power input of the controller. In addition to measuring power directly from the current and voltage waveforms, the instrument is also used to measure other signals.

“We deliberately chose this instrument because we wanted to capture very short pulses and spikes which typically occur in spot welding and during braking or acceleration processes”, says Matthias Paukner: “We also need to cover an enormous range, from a few thousand amperes during welding to quiescent currents of a few milliamps in hibernate mode. When searching for a suitable solution, we first used simple handheld power meters, then tried an oscilloscope and experimented with a modular system, but none of these solutions offered the combination of accuracy and versatility that we required.”

The PX8000 has proved particularly useful in demonstrating the effectiveness of certain measures that KUKA Systems has developed including special control programs that perform predetermined movements. In particular, the PX8000 has the ability to both record data and carry out subsequent analysis. This allows the measured values to be transmitted to a database containing data for a variety of movement profiles from many different components of a production line. Currently about 300 different values are stored for each robot type. The measured power values then form the basis for the simulation of the energy consumption of an entire production hall.

“Our goal for energy savings is in the double-digit percentage range. The investment for the measures required for this purpose should be amortised within two to three years”, says project manager Matthias Paukner