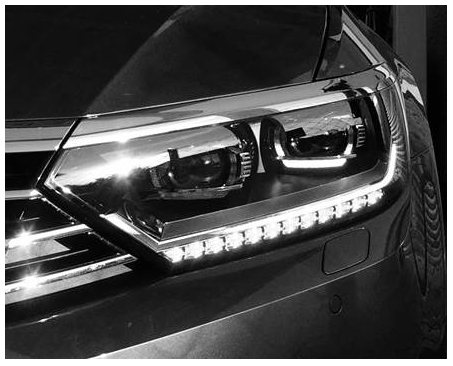 LED technology can be used for much more than lighting. This article explains how cars’ LED lights can also improve road safety, vehicle efficiency and traffic management –

Since the ‘60s LEDs have been used for signalling in machine-to-human interfaces, e.g. to indicate the status of printed
circuit boards. In recent years they have also been used for data transmission, as an alternative light source to lasers at a significantly lower cost.

Over the last decade Light Emitting Diodes (LEDs) have become a familiar technology for a variety of lighting applications, including automotive. It’s easy to verify their superior efficiency (measured by lumens/watt) and quality (measured by colour stability and lifetime) compared to the incandescent or halogen lamps commonly used in the past, and as the price of LED devices has fallen it’s hardly a surprise that LEDs are emerging as the dominant lighting technology. (source : Technavio).

Car manufacturers have been adopting LED lights on their premium models for more than 10 years. As the technology has matured, LED lights mounted

on mid-range models are now also commonplace. In parallel to this development, car manufacturers have been looking at ways to pass data
about driving conditions and behaviours between cars – an application known as Vehicle to Vehicle Communications or V2V. The aims of V2V are to make driving safer and make road use more efficient (source : allledlighting.com). One approach is to use the LED lights of a car to transmit some of this V2V communications data (See Fig 1)

The advantage of using light signals over other approaches, that make use of internet and cloud technologies, is that light signals are immediate and local. In other words, they don’t lose time sending signals to the internet and they don’t have to wait to receive signals back. They also don’t need the complex management and processing of signals from hundreds or thousands of cars in the area – V2V

the communication almost instant and therefore suitable for some types of real- time control functions of cars and other vehicles.

A number of organisations have been looking into communications techniques based on LEDs. For example, Intel has been researching the use of visible light communication (VLC) since 2008, and while their work on Li-Fi (light fidelity), as an alternative to Wi-Fi (wireless fidelity) communications, has largely stalled, Intel sees a significant opportunity for VLC to be applied to V2V communications (source : IEEE Spectrum). The opportunity is there for V2V VLC of vehicle size, speed and actions on the road to help with such features as adaptive cruise control, co-ordinated lane changing and collision.